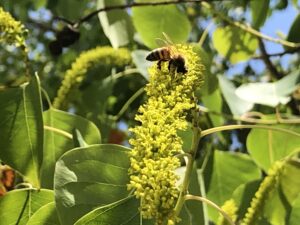 Animal and Plant Health Inspection Service (APHIS) is proposing to release two nonnative insects (a moth and a beetle from China) to eventually eradicate the Chinese Tallow tree from many southern states. Tallow has been part of the North American landscape since the 1700’s and is an extremely important nectar source for a million US beehives. This proposal would negatively affect all scales of beekeepers nationwide. The WHPA legislative committee has prepared comments to submit to the Federal Register on behalf of the WHPA. We encourage WHPA members to also comment on this dangerous proposal. Please see the draft letter below.

To Whom It May Concern:
I register my opposition to the introduction of insects to destroy the Chinese Tallow tree. The elimination of a critical nectar and pollen source for honeybees in the southern United States will have a devastating effect on the beekeeping industry throughout the nation’s beekeeping industry.

Chinese Tallow has been in the United States since the 1700’s and is a dominant nectar source for honeybees in the south. Maintaining ample, diverse food sources for bees is critical and becoming more difficult annually. Extinguishing a species that provides an ample food source for honeybees is a threat to the beekeeping industry. Honeybee health depends on vital nectar sources.

Insects are responsible for pollinating one-third of the nation’s food supply; honeybees are responsible for 80% of insect pollination. The California almond crop is 100% dependent on honeybee pollination, but that pollination comes from honeybees from the entire United States. A large number of these hives come from southern region states. Without Chinese Tallow to build strong bee colonies, pollination will not be as productive or efficient. One-third of all hives in the United States depend on Chinese Tallow. Two-thirds of all honeybee colonies in the United States pollinate California almonds; if half of the honeybee hives depend on Chinese Tallow, the ripple of this proposition will become a wave.

Elimination of Chinese Tallow will affect beekeeping operations in states like Wisconsin. Many northern beekeeping operations transport their bees to southern states in autumn and winter months to strengthen hives, produce honeybees for sale to northern beekeepers, and produce honey. Eliminating Chinese Tallow will adversely affect these businesses, forcing honeybees to work harder to find food sources, forcing beekeepers to supplementally feed honeybees thereby increasing operating expenses, and eliminating an income source for many beekeepers nationwide. Most significantly, it will reduce the number of honeybees available for sale for northern beekeepers, reducing effective pollination for northern crops and honey production.

Introducing two nonnative insects to eradicate a plant species is suspect, and the effects of this insect could lead to further devastation to honeybees. Plagued for decades by parasitic mites, invasive beetles, and other insect predators, little is known about the long-term effects of the proposed insects to eradicate Chinese Tallow. The potential unintended consequences of releasing these insects are another major concern to the beekeeping industry.