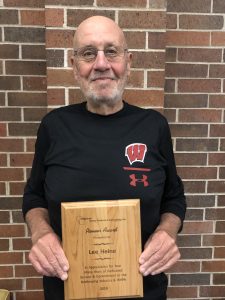 Lee Heine of Hillsboro, WI was honored with the WHPA Pioneer Award on November 2 in Fond du Lac, WI at the annual WHPA Fall Convention.The Pioneer Award is a lifetime achievement recognition of members who have made a long lasting, significant impact on the beekeeping industry and have continued to provide service over an extended period of time.

Through many years in the industry, Lee Heine has always been passionate about expanding WHPA membership and ensuring that many people – from experienced, seasoned members to younger members – be involved, not only to strengthen the organization, but to ensure that beekeepers are well informed about issues, proper beekeeping practices, and how they affect the industry, regardless of the size of their operation.  Throughout his career in the beekeeping industry, Heine has served as membership co-chair of the American Beekeeping Federation, chairman of the National Honey Board, manager of Big Island Queens, and branch manager at Dadant & Sons, Inc. Heine served WHPA for 10 years as vice president, president, and past president.  Even after holding office positions, Heine continued his work by chairing numerous committees over the last 20 years, serving as a District chair and on the Executive Committee, and spearheading beekeeping mentoring initiatives.  He continues to serve as an important part of the WHPA’s legislative committee, connecting with elected leaders to further legislation that helps commercial and small scale beekeepers alike.

Through his work with the WHPA, ABF, the National Honey Board, and his package bee business, Heine formed countless friendships and connections, and we have all benefited from these relationships.  He worked to make the annual WHPA Convention one of the premier state conventions in the nation by bringing high profile, nationally recognized speakers to Wisconsin.  He is a connector in Wisconsin beekeeping, bringing members together as new friends, and to bring even more fun and joy to WHPA conventions. Beyond our country’s borders, he traveled to Nicaragua in the 1990s to help organize and reunite the country’s beekeepers so they could improve their local economy and sell their honey on the foreign market. In his later years after retiring as the Dadant branch manager in Watertown, WI, he continued to be a student of beekeeping, working for Big Island Queens in Hawaii and bringing that knowledge back to Wisconsin and sharing his experiences with the WHPA.

Youth education is incredibly important to Heine.  He works to involve younger members in leadership roles in the WHPA, whether it is encouraging them to take positions as Committee chairs, District Chairs, Officer positions, involving them on speaking panels or at the annual Kids & Bees Expo, to volunteer at the State Fair or serve as a Honey Queen, giving them experience in his own business, or giving them their first package of bees.  His commitment to youth beekeepers has shaped the WHPA into a vibrant and diverse organization.  He encourages a legacy where younger members can become leaders, bringing value and voice to the state level.

Heine sees the value of hearing others’ stories and helping improve beekeeping operations.  He never turns down a good conversation, a good story, a good laugh, a good beer, or a Wisconsin Badgers game.  The WHPA is truly grateful for his service, the love he continues to give the organization, and the gifts he continues to provide us. Congratulations Lee Heine!